Kaikarou is a two-hundred-year-old tea house situated in the Higashi tea house district in Kanazawa, Ishikawa Prefecture, just over two-hundred kilometres north of Kyoto. Karhu sets the scene during Tsuyu, the rainy season considered a vital part of Japan’s wellbeing, giving life across the country. The understated grey-blue tones on the tea house’s exterior capture the rainy mood, further highlighted by the skilfully portrayed haku’u (‘sudden shower’). The positioned green geta in the entrance, leading to the simple warm red of the staircase, offers an alluring sanctuary from the downpour.

A sea of cool green tones flows through this 1998 print. The pale lilac petals of the flower in the foreground show a ripple effect like that left by a droplet of water on the flat surface of a pond. This ripple effect evokes a sense of movement, that one can imagine searching through the long grass and flowers as a gentle breeze in the spring morning. Karhu shows his mastery at conveying natural beauty to the viewer, with his soft palette synonymous with spring as well as the calm dynamism his textures give to the print.

Tomiyo is a tea house on the north side of Gion Town in Kyoto. Built in 1914 during the Taisho era, it is home to Meiko and Geiko who entertain guests. Karhu’s 1994 print depicts the tea house’s red noren invitingly pulled back, exposing the entranceway. A staggered shadow, presented through three slanted layers of increased shading, stimulates a feeling of the private and personal experience offered by the tea house. Once again, Karhu’s use of lines to create texture, notably here on the bench and the yellow noren add extra depth to the print. 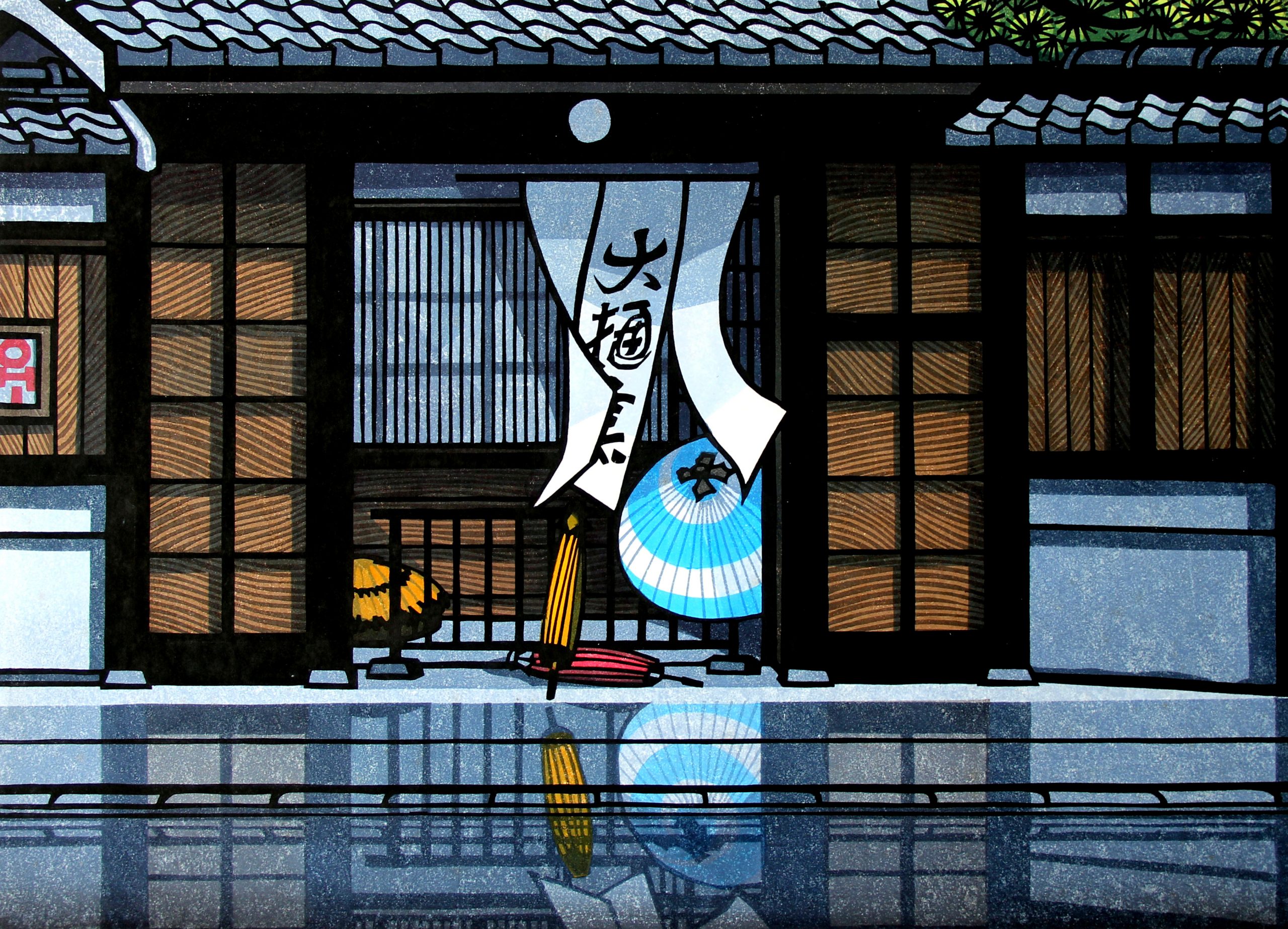 This 1999 print expertly portrays the street view of a building’s façade during Tsuyu, the rainy season. Karhu uses the dynamic windswept movement of the white noren alongside the building’s reflection on the wet surface of the road to tell the story of the rainfall which has recently subsided. The cool edge in the air, left after rainfall has stopped, is captured by the simple blue-grey dominated colour palette and lack of natural lighting, which would have been obscured by the rainclouds. The subtle faded sheen of the reflection on the road surface brings the scene to life, with perfectly muted colours highlighting Karhu’s aptitude at capturing the serene mood of the moment he is conveying. 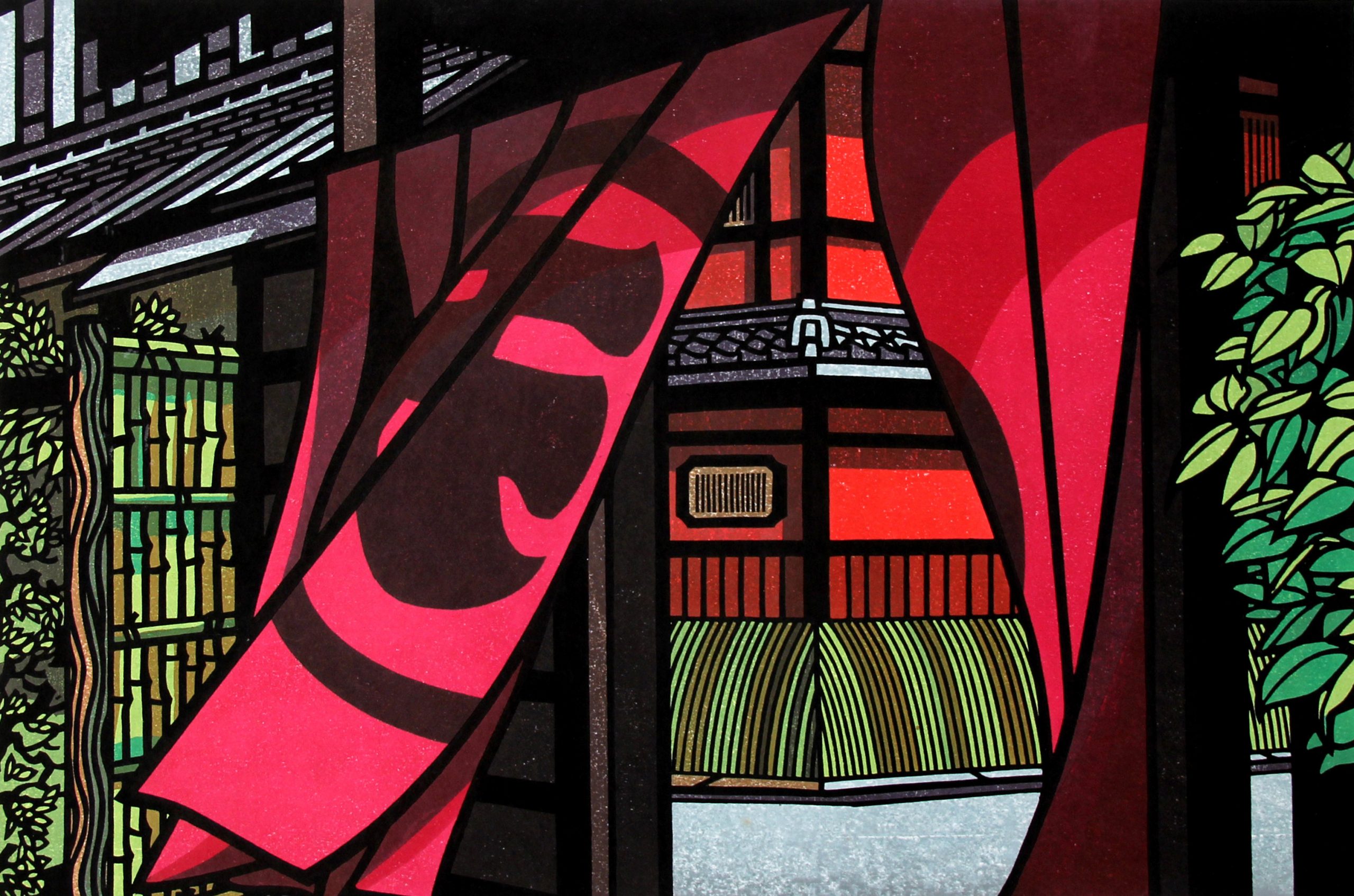 Windy Noren depicts a town scene with archetypal Karhu features. A gust of wind moves a red koren in the foreground, revealing the corner of a traditional Japanese building in a simple, yet impeccable composition. From the grey of the rooftiles and the red of the building’s exterior to the green of the leaves and latticed-bamboo, Karhu’s signature bold lines shape a classic picture. The variety of angles add further depth and verve to the scene.

Situated on the first floor of the Tomiyo tea house, this 1994 print shows a view of the main garden. In this print, Karhu’s signature bold lines prop up the architectural integrity of the room’s paper door exterior. The regimented lines of the exterior contrast with the varied angles of the garden. From the angled bamboo-latticed bridge to the freeform of the leaves, nature is free to flow against the man-made structure, highlighting its natural beauty as the green of the garden stands out against the tan and brown of the structure. A delightful piece of detailing in the foreground shows the gardens reflection on the red glaze of the table.

Uchihashi-tei, floating over the Kasumiga-ike pond, is one of the tea houses situated in Kenroku-en Garden. The tea house was originally built in 1776 before being relocated in 1874, after the pond was enlarged. The autumn leaves shroud the secluded tea house as it sits stilted over the water’s edge. The perspective from the orange-blazed leaves of the tree looming in the foreground gives the tea house a private impression as the calm ripples on the water’s brilliant-blue surface leaves a lasting imprint of tranquil natural beauty. Karhu utilises his signature bold lines and edges to outline a finely poised radiant palette in order to capture the season’s vibrant colour yet still maintain the simple charm of the scene.